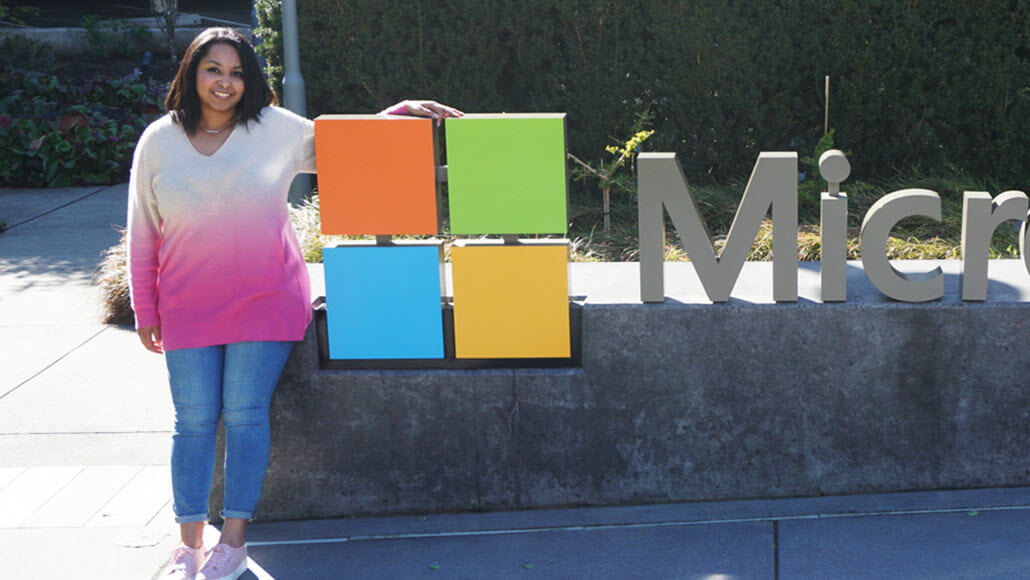 Cassandra Oduola recently landed a job offer from Microsoft’s Machine Learning group, another exciting step in her journey as an engineer. At the top of her field and with both a PhD in Computer Science and a BS in Physics under her belt, Cassandra was also a Grace Hopper Awardee. What’s driven her success? The answers might surprise you.

Tech is a highly competitive industry, and it’s common to feel pressure to have all the answers. But for Cassandra, learning how to be “radically honest” about what she did and did not know was a gamechanger, particularly as she moved from the research environment of grad school to the workplace.

“In school, if I didn’t know something I would just study for hours and hours, and eventually I figured it out,” Cassandra said. “No one cared about how long I was studying. But then when I got to work, that same mindset was no longer useful. You can only work eight hours a day, you can’t go into overtime, and you definitely don’t want to be working at home and not telling people and not getting paid for it.”

During her first internship, she found herself struggling to meet deadlines. Her coworkers encouraged her to ask for help. “Saying ‘I don’t know this, I need help’ is a really hard thing, especially when you’re on the job. Especially when you’re a female, and you’re around all of these really smart people,” Cassandra said.

“But I learned that you have to do that. Because at the end of the day, no one knows everything. I was able to finally have these conversations with other people whom I viewed as really smart,” she said. “They often said, ‘I don’t know that either’ or, ‘I had trouble here. Let’s figure it out.’ Later, they felt comfortable asking me for help as well.”

For Cassandra, it was freeing to be radically honest. It helped her realize that asking for help was a normal part of learning, and it led to better collaboration with her teammates.

“It got to the point where I was even doing it during interviews, which is kind of crazy,” Cassandra says. “But I would say, ‘You know, I don’t know the answer to that question.’”

Letting curiosity be the driver

When talking about her upbringing, Cassandra describes learning about the world through books. Both of Cassandra’s parents are therapists who encouraged her to follow her strong will and curiosity, wherever it might lead.

“My father is from Nigeria and when he came to the United States, it was actually really hard for him to get any journalism jobs because of his accent,” Cassandra said. “So he ended up switching to psychology, because he thought therapists were getting jobs that made money. My mother is Mexican and loves art, but also went into psychology to have more opportunities.”

But Cassandra’s parents wanted her to have a different experience and be free to choose her own path. “My parents were never like, ‘You have to major in this.’ Their big thing was encouraging us to do something that helps people and that you love, rather than for the money,” she said. “I just happened to love physics and math and science, and I was good at it.”

Having the freedom to discover her interests encouraged Cassandra’s love of learning. “They gave me the space to play with dolls or play with computers,” she said. “I went through these little learning phases each year as I was growing up. There was one point when I was really into learning about wars. I was in the fourth grade and my parents never said, ‘Oh, that’s weird, you shouldn’t learn about that.’ Another year, it was mystery novels. To some people it might have seemed undirected. But honestly, if I didn’t have that space, I probably would not be where I am right now.”

In college and grad school, Cassandra’s background led her down several paths in engineering, including quantum turbulence (picture combining quantum physics with aerospace engineering) and robotics. “Over time I realized that my interests fell into stochastic systems,” she said. (Stochastic systems are governed by random probabilities.) “When I got into machine learning, I gravitated toward things like image processing. You’re dealing with pixels, which has to do with light, which also gets back to that physics space.”

As a program manager for Microsoft’s machine learning group, Cassandra will be looking into bigger picture questions, such as how machine learning might be applied at scale to solve problems. Still in love with physics, she’d like to research quantum artificial intelligence in her spare time through Microsoft’s free Quantum Development Kit.

Cassandra notes, however, that when it comes to building a career, it’s important to find a balance between deep interests and the demands of the job. “At my first internship, they told us we could do whatever we wanted. So I mentioned exploring quantum image processing, and my boss asked ‘Can that be done in two weeks?’ The answer was, probably not,” she said. “I’ve learned the hard way in various positions that tangents can’t always be explored. The priority needs to be doing what needs to be done, and within deadlines.”

Grit in the face of failure

When it comes to getting hired and building a career, Cassandra advises new grads to have an open mind. “I often say, ‘Don’t be a job snob.’ It’s important to be open to every opportunity, especially when you’re first starting out,” she said. “I did an internship with an unknown startup in College Station, and no one’s probably going to ever hear about the company. But I learned a lot because they gave me so much responsibility. And it actually ended up opening doors for me, because I had to learn how to set up Amazon Web Services (AWS) and Azure as well.”

“So when new grads tell me, ‘I really just want to work for a big tech company,’ I say, ‘You should be getting as many interviews as you can.’ Because those interviews are actually practice. You still need to practice going in front of people, going through the technical interviews, learning what to say, learning about yourself in those situations, as if you were your own little machine learning problem,” she said. “You can tell yourself, ‘This is good, this is bad, I need to change this,’ so that when you do get in front of the Googles, or the Microsofts, or the Apples, or whatever, you’re a little bit more refined.”

She also encourages new grads not to be afraid of striving for opportunities. When it comes to big tech companies, there is a misconception among some job hunters that if they fail the first time, they won’t ever get a second chance. “I met someone who said, ‘I got an interview at Facebook, but I didn’t feel ready so I canceled it.’ Some people think that if they fail, they’ll be blacklisted. But that’s not true,” she said. “These companies go through so many people. If you wait six months or a year, you’ll be able to apply and interview again. If you caught their eye the first time, then you can probably catch their eye again.”

“Everyone fails,” Cassandra added. “There’s a website dedicated to programmers who have failed job interviews. Some of them now work at that same company that they originally failed at, and some work at other companies that are just as amazing. So it’s okay to be fearless and put yourself out there.”

When it comes to succeeding in the tech industry, which is only 13 percent female, women face an additional set of hurdles. “I like to encourage women that I see getting into the field. It’s tricky to navigate the politics of inherent bias,” Cassandra said. It can also be hard to stay positive in a work environment where people may not be very talkative or inclined to say nice things, and I have seen women quit because of that environment. I’ve also seen women push through it, and it’s not easy.”

There are no simple answers for women in tech. But Cassandra believes that “believing in yourself and trusting in your passion” is a strong place to come back to. She also believes that staying true to yourself can be a strength.

“I don’t think I ever want to be that person who’s putting people down and feeling like they have to act tough in order to climb the ladder,” she said. “I have a backbone. If I don’t like something, I definitely tell someone. But I feel like we can be ourselves and be amazing at work. One of my strong points is bringing people together, listening, and creating a work environment where people are happy and feel empowered. That, to me, is success.”