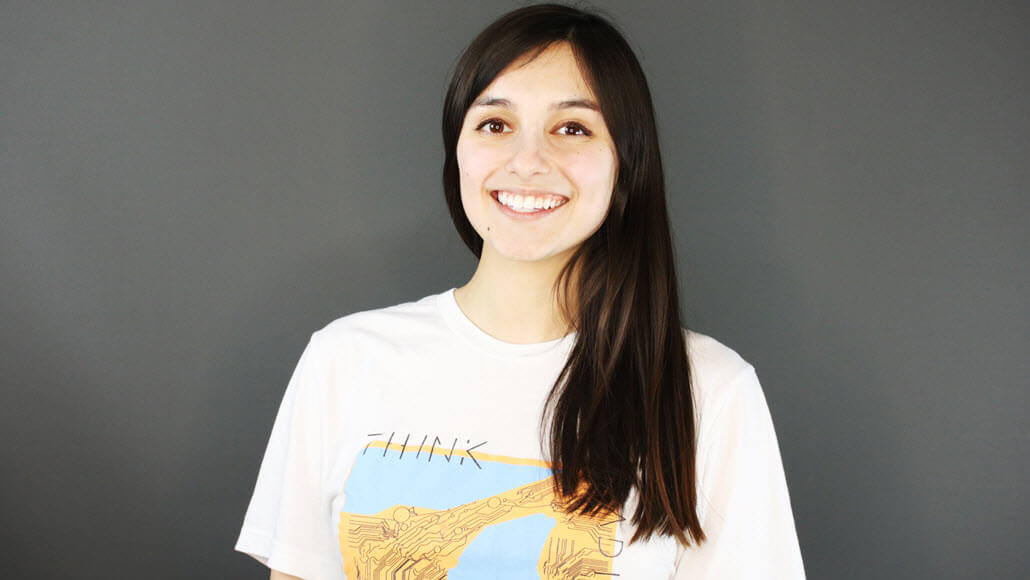 Mónica is a Windows Insider who will graduate soon as a CS major and Art minor from the University of Wisconsin-Madison. She discovered her fire for coding unexpectedly. “I came out of high school thinking I was going to do marketing,” Mónica says. Then, through friends who were programmers and a business competition that she entered with four CS majors, Mónica found herself gravitating toward technology. 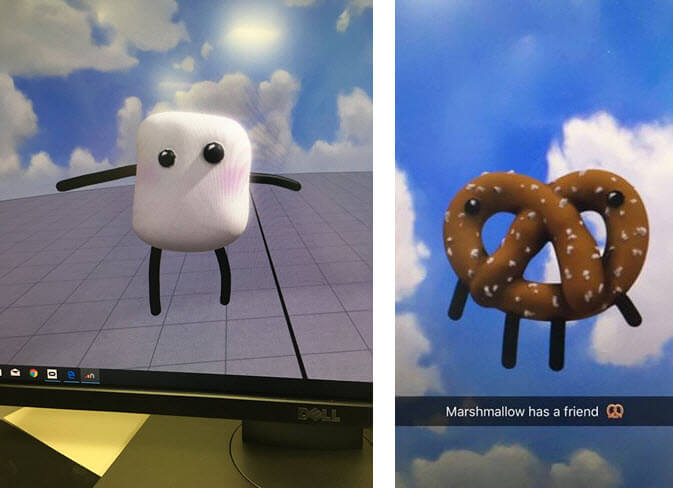 Images: Marshmallow and Pretzel creatures battle for control over Candy Island in a VR game recently created by Mónica and her teammates.

“I just saw the way my teammates could code and build something so tangible,” Mónica recounts. “I saw them using their reasoning skills and creativity mixed together to bring ideas to fruition. It was amazing.” Over the span of the competition’s weekend, Mónica became fascinated. That prompted her to enroll in her first computer science class.

Now in her final year of college, she’s finishing up classes on databases, C++, software engineering, and virtual reality. A longtime painter and illustrator, Mónica combines her visual art practice with her coding superpowers. “I really like building and being able to share my creations, especially, for example, a VR world. I can share that with friends and family,” Mónica says. “I would love to build a career in software engineering, focused on 3D or 2D computer graphics, animation, and VR.”

For Mónica, transitioning into CS was a gamechanger but far from easy. At first, she worried that switching fields — dropping out of the business school to pursue art and CS — would mean that she would be struggling to catch up to peers who had already been studying CS for years. “I felt like an outsider in the beginning,” Mónica says. “Not gonna lie — being exposed to this new world was a little scary.” She wondered if she should stay aligned with her initial business focus and study IT. But she quickly realized that the artist in her was also a coder. Her passion was creating and building technology itself.

Image: Mónica (fourth from the right) with her fellow winners of the 2018 Windows Insider Women in Computing Award at the Grace Hopper Celebration.

To build confidence and a community, Mónica joined clubs, participated in 10 hackathons, and immersed herself in online discussions about tech. Recently, she also attended the Grace Hopper Celebration, the largest gathering of women technologists in the world, as part of the Windows Insider Women in Computing Award. There, she met up with colleagues from past code camps and networked with women who are innovating in a huge variety of fields.

“There is definitely a gender discrepancy in my school and in the industry. So seeing so many awesome, smart women in tech makes you really excited,” Mónica says. “It builds that community and support. At Grace Hopper, you’re with people who understand when you talk about those ups and downs, the frustrations, the happiness. It’s a great feeling to see so much success and hope all around you.”

For Mónica, surrounding herself with supportive mentors and peers has been a critical part of her success. “Studying computer science has presented me with hurdles that I never thought I would face,” Mónica says. “The academics are challenging, and the culture is competitive. I’m grateful for having supportive friends, family, and mentors like my Code2040 mentors, Jordan Smith and Nick Chadwick! They taught me so much about the industry and software development.”

She recalls feeling devastated when she failed her Calculus II exam shortly after switching majors. There were peers who openly questioned her abilities. “I was crying and thought, ‘I don’t know if I’m cut out for this.’ I had so much doubt and fear in my heart.” Her friends encouraged her, and she took the class again and succeeded.

“I learned to not let other people define me. It’s easy to look at other people and their success, and compare yourself and then feel less than adequate,” Mónica says. “But if you just compare yourself to you and recognize the progress that you’ve made, you can see how far you’ve come—rather than how behind you are. Because there will always be more to learn. But there’s also always a way to move forward.”

Looking back, Mónica has been driven by a positive feedback loop of mastery and learning. A quote by Jocelyn Glei, gave her perspective throughout her journey: “​Meaning emerges from mastery rather than the other way around. You become passionate about something in the process of pursuing and learning about it more deeply.”​

In addition to preparing herself for graduation and beyond, Mónica devotes her time to helping young women and minorities discover their own coding superpowers, through organizations like Code2040, Maydm, and The Hub. She would like to see CS introduced to girls at a much earlier age, and with the emphasis that coding can bridge a wide spectrum of other interests, like linguistics, art, and games.

She offers this advice to her mentees: “When we use our grit to step out of our comfort zone, our passion increases in the process. With each leap taken, statistically our chances for success increase. When learning something new, we’ll feel unfamiliar and uncomfortable at first, but slowly we gain mastery and feel accomplishment. And a fantastic way to gain mastery is to teach others.”