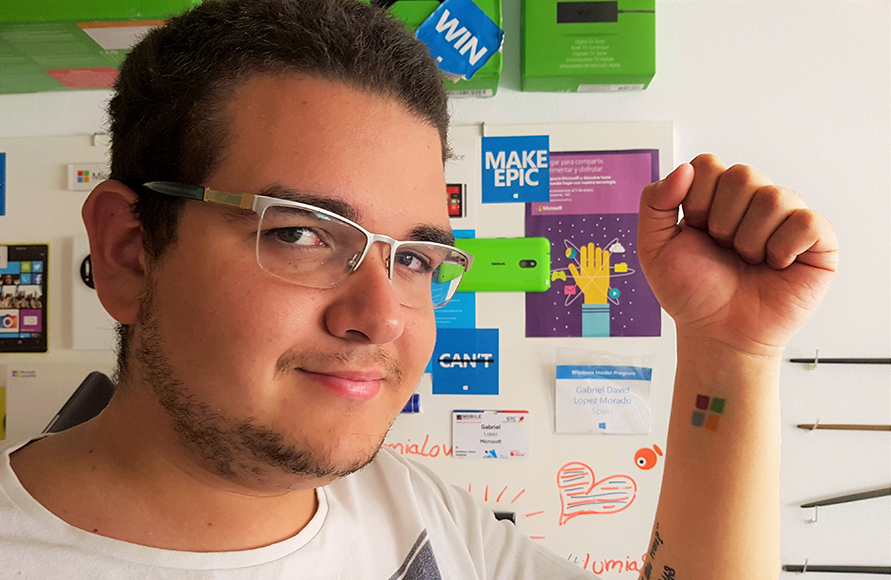 Gabe Morado, Windows Insider and Microsoft superfan, chats with us about good marketing and what makes a brand come to life.

Gabe Morado, based in Madrid, Spain, wears his love for Microsoft on his wrist. He decided to get the tattoo after winning the Windows Insiders to Campus competition in late 2014 because, “Interacting with Microsoft products isn’t just a hobby of mine — it’s a huge part of my life.”

A marketing and advertising student, Gabe is fascinated by the way creative marketing can shape perceptions and enable companies to build an authentic relationship with customers. Gabe’s crush on Microsoft was sparked by the Lumia 800 smartphone, but it took more than a first date for this tech enthusiast to become a superfan.

In November of 2013, a pop-up called “Espacio Microsoft” gave Gabe hands-on experience testing cool new gear. He then joined the Windows Insider Program when it launched the following year, and shortly thereafter entered the Windows Insiders to Campus competition, only to be selected as one of ten winners. Gabe marks his Microsoft milestones by keeping the packaging from each product purchased. And what does he do with all those boxes? He hangs them proudly on his wall.

“Looking at my collection, I can see how much Microsoft has evolved in only 4 years,” he explains. “For example, it´s great to see how much the design of the packaging has changed from the Lumia 800 to the Lumia 950 XL.”

“And now, Microsoft is surprising us every year with their new products. In 2015, Microsoft introduced a technology that was totally unexpected — HoloLens. Augmented reality was a field that was not fully explored, and Microsoft led the way. I think nobody was expecting HoloLens, because most people only see Microsoft as Windows, Office, and Xbox. With HoloLens, Microsoft created a product that made everybody say, ‘Wow!’”

Being a part of this wave of innovation and the community around it makes Gabe proud to call himself a fan and an Insider. “The best part of the Insider Community is its ability to bring people together — people with the same passion for Windows,” he says. “The Insider Program widely meets the objective of getting feedback to Microsoft to help it develop the best OS. But it is more than just a beta program. I’ve met a lot of wonderful people thanks to this great community.”

So what does this Microsoft superfan think is the key ingredient to good marketing? “Fun,” Gabe says. “It’s the best way to get inspired.”