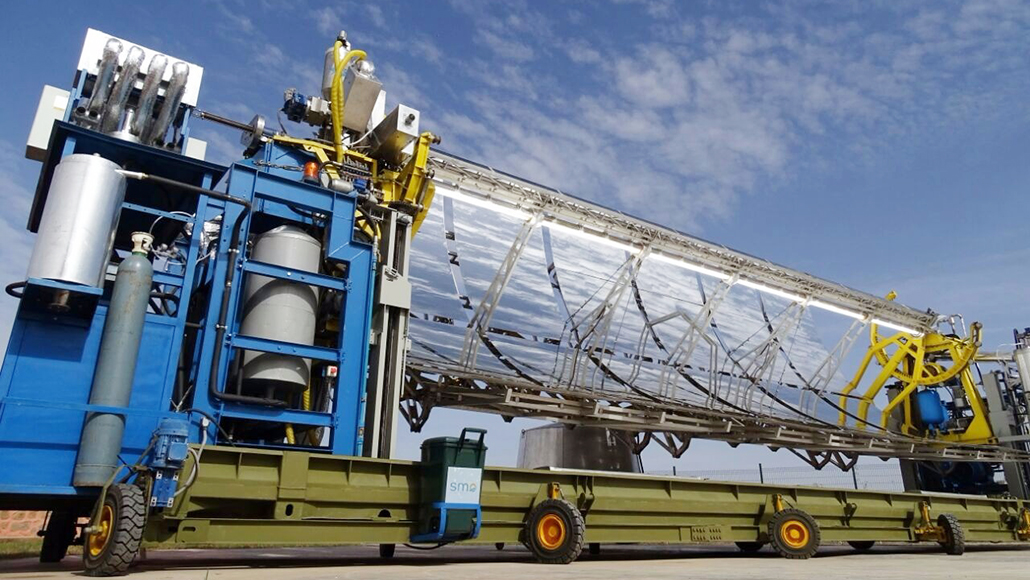 The world is facing a trash crisis. From the Great Pacific Garbage Patch to overflowing landfills, 1.3 billion tons of waste are produced worldwide every year. The problem is urgent for communities like the French Caribbean islands of Guadeloupe, where just 630 square miles, or 1,630 square kilometers, of land support more than 400,000 residents. That results in a lot of waste made by humans and nowhere to put it without harming the islands’ delicate tropical ecosystem.

A group of Windows Insiders decided to help Guadeloupe tackle this challenge—and ended up developing a breakthrough technology that could help nations with the global waste crisis. Hamza El Baroudi, CEO, and Faical Said, software and automation architect, are part of the team at Pour Et Par le Soleil (PEPS), a Moroccan company based in Marrakech. PEPS has partnered with the firm Guadeloupe NST to develop Solar Microwave Oven (SMO®), a waste processor the size of a shipping container that uses solar power to turn waste into electricity.

“One SMO unit can recycle 27 tons of waste per day, and three units could produce enough electricity to power half of all the public lighting in Marrakech,” Hamza said.

The unit uses pyrolysis, a thermochemical process, to transform waste. SMO is powering pyrolysis with 100% solar energy, which makes the system carbon neutral, and according to Hamza, the first of its kind in the world.

“We’re continuing R&D, and the goal is to not only be carbon neutral, but carbon negative,” Faical said. SMO isn’t just producing electricity, it also consumes CO2 as it turns carbon from waste into solid states like biochar, a valuable agricultural fertilizer, and activated charcoal, which is in high demand for water purification and other industrial uses.

A key part of the technology involves automation and machine learning, which make sure the machine can process many kinds of waste, including plastics that are mixed with paper and aluminum in packaging materials. Because garbage contains moisture, can be many sizes, and is made up of mixed materials, more than 150 sensors and actuators make it possible for each SMO unit to work in ever-changing conditions, all while using solar energy to power complex mechanical and chemical processes.

As a computer engineer, Faical was familiar with automation, but he quickly understood that automation alone wouldn’t be enough for SMO. In the early phases of its development, a key challenge was waste clogging the pipes. They struggled to find exactly where a jam was occurring and whether to speed up or slow down the feed.

“I realized that the situation was analogous to what you find in gaming,” Faical said. “I researched deep learning and how it applies to gaming, and I found a good technique called actor-critics, where there are, in fact, two models. One is the actor, and the other one is critiquing the actor. So, the actor will be doing the actions, and the critic will say, ‘No. This is not good. This is better.’ Then the actor changes, based on the critique. We created and trained these models on the Microsoft Cognitive Toolkit.”

Now that they’ve used machine learning in SMO and tested it in real-time, the team is exploring other applications for it. “We look forward to working more with machine learning for the operation of big waste management stations, composed of perhaps hundreds of SMO units,” Hamza said. “It is also exciting to think about how machine learning could support other activities of the company, such as managing manufacturing lines.”

In addition to Microsoft Cognitive Toolkit, Windows played a major role in SMO and the PEPS team’s work. “An embedded Windows machine is the brain of SMO and is connected to a number of programmable logic controllers,” Faical said. “In our team, Windows is used in every device and all the time in a very natural way. Our team needed the best technology to organize every step of this project. We used all the power of the Windows, Office 365 with Teams, and Azure to make this dream a reality.”

Security was also a key benefit of using Windows and Azure. “When it comes to R&D and innovation, sensitive information is a concern,” Hamza said. “One of our challenges was to find the right solutions and platforms to securely communicate data between our teams in Marrakech and Guadeloupe, so from the beginning, we implemented Microsoft Azure Storage and essentially all the Microsoft solutions we could.”

The team’s hard work paid off when they were able to present SMO to the world at COP22 in 2016. The technology was well-received, and the team is now in talks with potential partners who could help scale up the technology and use it in industrial settings.

“We’re very proud to be a part of such an exceptional project and part of a great team of developers, engineers, and PhDs, all from Marrakech,” Faical said. “All of the skills we needed were right here, along with plenty of sunshine.”