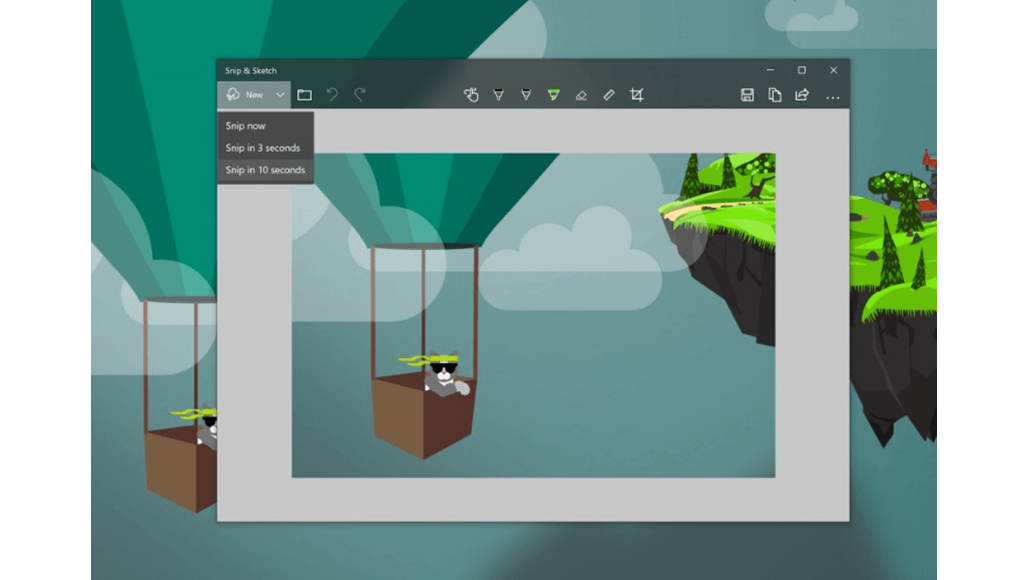 We recently released another version of the Snip & Sketch app, which is a handy tool built into Windows to make it easier to take, edit, and share screenshots. This latest version provides even better performance and builds on a long list of updates that we’ve built into the app over the past 6 months, many of which your feedback helped drive.

So how has Snip & Sketch gotten to where it’s at now, and how are Windows Insiders helping us determine what’s next? Let’s take a look!

Being able to take screenshots or snips of your screen has been a part of Windows since we introduced the Snipping Tool back in 2002—and with good reason. Sometimes, taking a screenshot is the easiest and most effective way to capture an idea, explain an issue, or communicate just about anything on your device.

Fast forward to May 2018. With millions of people using the tool, we decided it was time for an update. So, we made the leap to a more modern snipping experience with the introduction of the new Snip & Sketch app to Windows Insiders with Windows 10 Insider Preview Build 17661.

A lot of the app’s functionality was originally introduced as part of the Windows Ink Workspace. As a standalone app, Snip & Sketch offered even more benefits over the original, full-screen experience. For example, because you can now switch between Snip & Sketch and other apps, multitasking has become much easier.

The new app also gave us the ability to update it directly, and therefore more frequently, through the Microsoft Store, without having to wait for the next Windows release to introduce new updates. That option was especially valuable in the coming months as you provided an amazing number of insights and suggestions for how we could make the app even better.

As Insiders played with the first version of the app, two suggestions in the Feedback Hub quickly made it to the top of the list. One was to delay capture of your snip, so you had time to open, set up, and capture items like pop-up menus. The other was to be able to take a snip of a specific window open on your screen.

First, we delivered our delay Snip Feature. To use it, just select the arrow next to the New button in the app, and you’ll now find options to Snip now, Snip in 3 seconds, and Snip in 10 seconds. Then we followed up a few months later in 19H1 Insider Preview builds with Windows Snip.

Along the way, Insiders also suggested that we make it easier to print screenshots. We tackled that request, too, and now you can print directly from the app. We also heard your feedback about expanding file support and screenshots can now be saved as jpg, gif, or png files. Yet another interesting suggestion which we added, an option to copy updates made to your snip, so they appear automatically on your clipboard.

As we’ve started development for the next release cycle, we’ve concentrated on fine tuning performance of the app. Once again, Insider feedback has also played a big role in helping us identify and prioritize key issues.

For those of you in Skip Ahead, you might have already noticed these improvements with our latest version of Snip & Sketch in Build 18850. For example, we added a fix to correct an issue where some snips were blurry when saved to the clipboard. We made sure that your Pictures library is the default location for snips you save. And we updated the default save format to be png. Another great suggestion from an Insider!

As we look to the future, we’ve got other top Insider requests on the drawing board, including new typing and shape annotation tools, a zoom feature, and more help for discovering the powerful snipping keyboard shortcuts. It’s still a little early to confirm exactly which features will make it into the future builds, but one thing is for sure. Your feedback will continue to play a huge role in helping make Snip & Sketch even better as we move into 19H2 and beyond.

Please keep sending feedback and upvoting requests in the Feedback Hub. Your input really helps us prioritize and make a case for further investments in Snip & Sketch.

To learn more about Snip & Sketch, check out this Windows Community in-depth video: