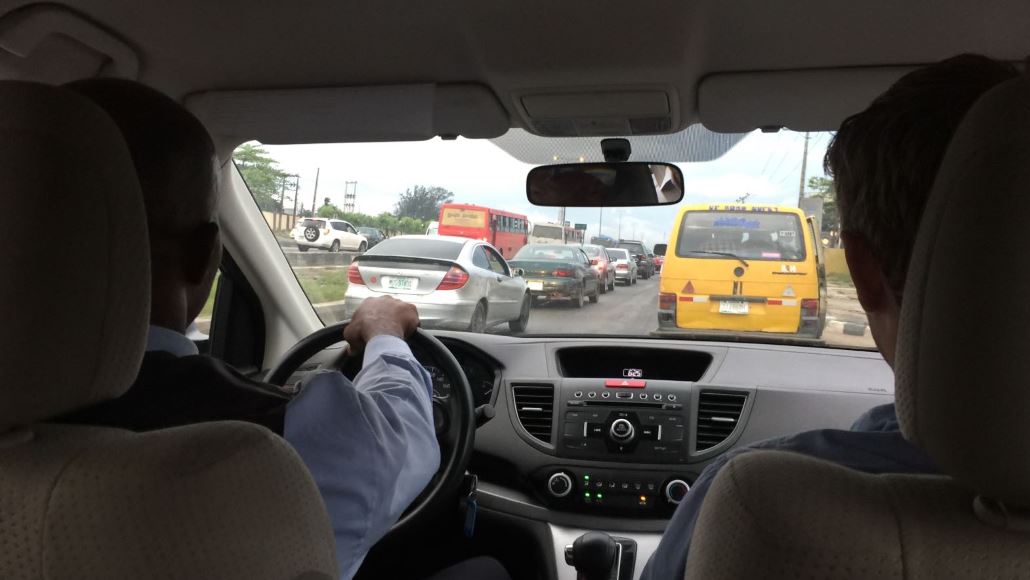 You see them on the road to the Lagos airport.

The asphalt is barely that — it’s mostly mud and lots of potholes after a rain. Cars and taxis heading to the airport must travel slowly, their drivers dodging the worst of the holes. There’s usually a traffic jam there.

Right where the traffic slows is where they wait. They seek out people like Thomas first. Tom has one of the biggest hearts of anyone I know. The work we’re doing is his life’s passion. Already on this stretch of road he’s dreading leaving Lagos.  I think he’d actually prefer our taxi get stuck, so we’d have a good excuse to miss the flight home. The vendors go straight for him every time.

These are vendors of everything you can possibly imagine. They sell magazines, potato chips, hair brushes. They catch Tom’s eye, hold his gaze, and beseech him to buy without saying a word. Nearly all of them is smiling. Tom’s heart is overflowing; he smiles back; he starts to roll down the window. Potato chips it is.

In addition to their wares, the vendors offer these potential clients a reminder of how terribly unfair life can be, of how lucky Tom and I and Bambo; Fernando and Raji and Guille; Dona and LaSean and Dara are. All of us are literate, educated, mostly healthy, and employed. Not all of us were born in the United States–but all of us now live and work here.  We are well and truly lucky.

The contrast is stark between us and the vendors on that road. I’m sure each one is aware of his place in the pecking order; there is a gradation among them.  Yet even the richest of the touts makes $10 USD in a day. Maybe.  And the contrast is why Tom buys, not because he needs potato chips.

Yet Tom buys the potato chips from the teenage boy. Tom does not just hand him cash.  The nuance is important. There are beggars on the road too, but most of the people we pass slowly on that stretch offer what Femi Longe calls a value exchange. The boy has offered something of value for the money Tom hands him.  There is value in the fact Tom can eat the chips, but also value to Tom from supporting a microbusiness, supporting a person vying with the odds to make a sale and to support his family.  Tom isn’t just buying the chips.

More than that. These vendors wake every morning, gather their things, head to the airport road, and they brave illness and poor weather to sell their wares. They haven’t given up. They wake, they roll up their sleeves, they work.

This human desire to work, to resist, to defy the odds, to strive day in and day out regardless of the task–it seems universal. I have seen it in the Dominican Republic; in Cambodia, Laos, Vietnam. I’ve seen it in France, in Senegal, in Nepal, in New York. I’ve seen it in Seattle.  This desire to work for it, to roll up your sleeves and fight astounds me, inspires me, challenges me. I see hope in this desire.

I remember the night we announced the 25 winners of the #Insiders4Good Nigeria Fellowship.  For several days straight, Tom and Raji and Dara had worked to create and print a poster for each Fellow describing their business ideas.  In a way these posters represented far more to the Fellows than just a piece of paper.  They represented a tangible sign of their true achievement, of having been selected from a pool of 5,000 other applicants.  They’d earned additional support and resources and mentorship for their ideas.  Those posters were important.  They weren’t just paper.  Unfortunately, someone had forgotten to tell the hotel.  The posters lay in a stack.

It was admittedly a small thing.  I mention it only because I think it’s a marker of who we are and what we’re trying to accomplish.  We’re a group of people who honestly care about what we’re doing.  Sure, our NinjaCat team works for Microsoft.  Sure, in FY16 Microsoft earned $84.7B in revenue.  Sure, we’re visiting from Microsoft HQ, and at an event put on by our colleagues in the Microsoft Nigerian subsidiary, in the ballroom of a high-end hotel.  Sure, someone else could have done it — someone from the hotel, a waiter.  Sure, it was just paper.  In fact, we hadn’t even mentioned the posters to the Fellows.  Did we even need to put them up?

But it was important that the posters be hung.  So, we hung them.  Guille found tape somewhere.  Fernando rustled up something like five tacks [thanks Fernie, muack! :)].  Kendra found some more tacks.  We ripped off pieces of tape and made little sticky loops, we put the tape or some tacks on the posters, and we hung the posters on the wall.  This was not back-breaking labor.  This was not staying out all day in the brutal sun or driving rain, selling potato chips to SUVs and taxis driving to the airport.  Maybe it took 20 minutes.  It was kind of fun.

“Someone else” could have done it, though.  It was no one’s “job.”  Each of us is a highly-trained software engineer, technical evangelist, or senior operations manager.  Hanging posters does not contribute meaningfully to the Microsoft multi-billion-dollar bottom line.  But hanging the posters was important–not to us, but to the Fellows.  So, we rolled up our sleeves and “did the needful.”

Microsoft folks aside, I was impressed most that Femi rolled up his sleeves and hung the posters too.  Femi did not at all have to do this.  He doesn’t work for Microsoft.  He is one of three founders of CC Hub.  Only a few weeks before, Femi had personally welcomed Mark Zuckerberg to the CC Hub, shaken his hand.  Femi is an important, busy man, always on the phone, often difficult to reach via email or Slack because of all the meetings he’s leading.

That night, however, Femi rolled up his sleeves and helped hang posters.  Certainly no one told him to help.  In fact, I don’t think anyone thought to ask him if he could lend a hand.  Femi saw a need, realized he could help, and he just jumped in.  This was no photo op.  This was a statement about who he is.

This is the sort of defiance I mean.  I’m impressed by people — regardless of their station in life, their income, their parents’ wealth, where they went to school, their team size — who do what needs doing, because it needs doing, and because they can meaningfully help.