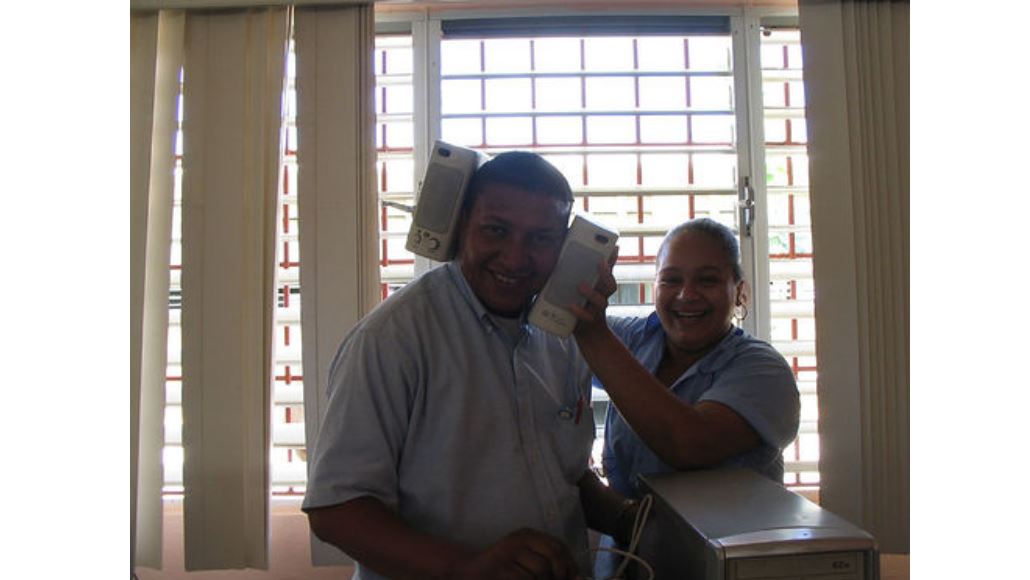 I could buck up and start, or I could go home.

It was 2004.  A procession of us headed over to the computer lab on Friday. Julio, the security guard, unlocked the padlock then heaved open the heavy door. With us were the school’s principal and five or six teachers. The room clearly hadn’t been opened for a very long time. We were in the high desert, so everything in the lab was coated with a thin layer of dust. About 20 computers were arranged neatly on rows of desks. Each had a chair.

Since the town had a blackout at the moment, Julio powered up the lab’s generator, which rumbled to life. Once the lab had electricity, I tried to turn on one of the computers. It beeped but did little more. The screen remained dark. I shut the place and headed home. Our little group seemed surprised at how quick our visit had been, but I needed to get out of there.

To be honest, I was crushingly disappointed. When I’d applied to the Peace Corps, I’d had visions of using my fancy Ivy League Computer Science degree to teach programming in the developing world. I’d transform a group of young learners into developers who could outsource to the Wall St startups and banks I’d worked with in New York. They’d talk to them via Skype, and upload changes via SFTP.  In my mind, I would single-handedly save a poverty-crushed town with high-tech employment, put food on tables all around town, and be a big hero, talked about for generations to come. Yet here I was, several months into my time in the Dominican Republic and several weeks into my time in Villa Fundación de Baní — and the damn computers didn’t even work.

It had finally sunk in just how unrealistic my vision had been. I felt low. My Spanish had a long way to go; I was getting sick all the time from food and water I consumed; I’d left all my friends and family behind in the US; it was very hot; I was lonely. I’d been dreaming of fighting my way free of the loneliness through good, hard work. Yet most (all?) of the computers didn’t work.  It wasn’t like I could buy new ones.  I was only a few years out of college and still had massive student debt.  The Peace Corps model was to send people, not to send money.  And I wasn’t sure at all that we could fix them. Despite my fancy degree, in fact I had never actually opened a computer before coming to the DR.

Even if we could turn them on, we would likely need to figure out an operating system [I know, right?]  to use, install some software on them, network them, and keep them running. And if I could do that, then how would I deal with the near-constant electrical blackouts?  We’d constantly need to restock that generator with fuel, or figure out some sort of solution with solar, biogas, or wind.  How would we deal with the dust?  Or security — what if we got things figured out but someone stole everything?  Or the fact that none of the students really knew much math or any English, let alone intro to CS 101?  I was spiraling a bit with all the unknowns.

That night I headed to the park, with my best friend Victor Manuel and my dog Nacho.  Victor Manuel essentially had adopted me, as I had adopted Nacho. Someone had found Nacho in the streets, homeless and hungry, and kids were throwing rocks at him. And Victor Manuel had found this gringo dude with poor Spanish smack dab in this desert fishing town, pretty much wandering. We were a scrappy group of three.  That night we discussed options.  Really there were two.  Either I could give up and go home, or else I could buck up and do the best I could with what I had.  I’d have to learn the rest.

Julio let me into the lab again on Saturday morning, then went off. With no students running around, the place was quiet. This time, I’d brought only Victor Manuel and Nacho. We expected to have electricity for a few more hours still. I wanted to see how herculean our task would be. We made sure that all the computers were connected to power, then walked around turning them all on. I think only six powered up fully into Windows. Others stopped early on, at the BIOS screen. Others didn’t even have a working monitor. It was a start, though.  We could do this.  We could use working parts from a broken computer to replace components in other computers; just swap them out.

We had another power outage on Monday.  That was ok — the computers remained off.  I picked up some chalk and drew on the board a picture of a computer’s components: case, power source, motherboard, hard drive(s), memory, keyboard, mouse, monitor. Twenty-one students looked at me expectantly. We had started.