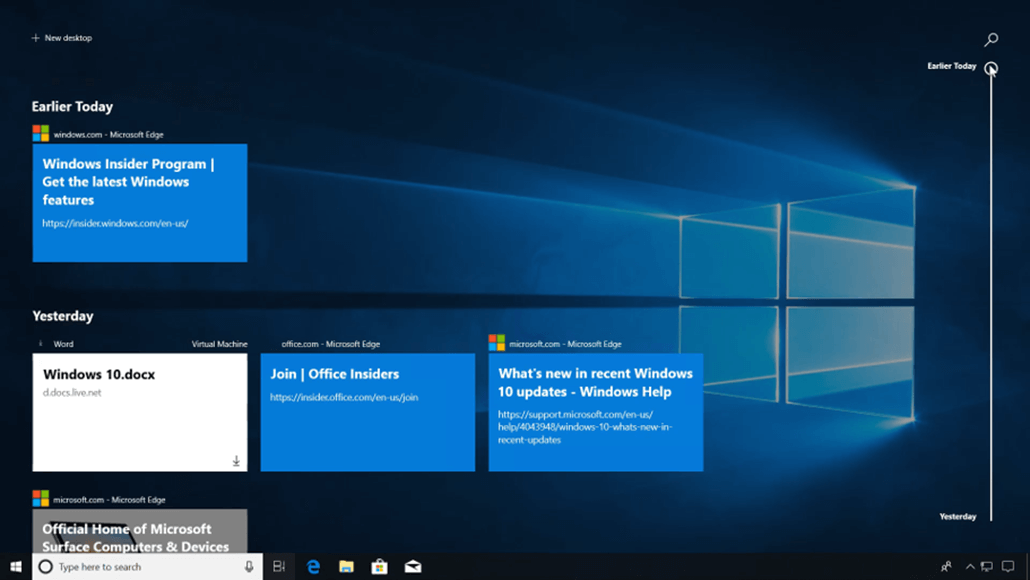 With the introduction of our new Chrome extension for Timeline, a top Insider request, we also wanted to take a deeper look at Timeline with you.

For those new to the feature, Timeline is all about making stuff on your device easier to find. Unlike most search applications, Timeline not only brings together files, websites, and other stuff from across your devices, it also organizes everything in chronological order. Can’t remember the name of a website that caught your interest a few days ago? Just scroll down, and it’ll be there. Need to quickly get back to a document you were working on earlier today on OneDrive? It will be there, too.

So how has Timeline gotten to where it’s at now, and how are Windows Insiders helping us determine what’s next? Let’s take a look!

Timeline was officially released with the Windows 10 April 2018 Update. Before that, we introduced it to Windows Insiders, starting with Windows 10 Insider Preview Build 17063.

As more and more Insiders tried Timeline, feedback quickly came in from across our channels, including Feedback Hub, our automated feedback systems, and across social media.

One of the early and most popular Insider requests was to make it easier to clear all activities from your Timeline. A few builds later on Build 17083, we added the option to clear activities by both day and hour directly from Timeline. And that’s when something interesting happened. We saw a 40 percent drop-off in Insider devices using the original Clear Activity History button in Settings. It seemed the more control we offered Insiders, the better—a valuable insight that inspired future feature planning.

Insiders also liked the cross-device functionality and wanted the option to access Timeline on their mobile devices. One clever Insider went one step further with a suggestion that also became a top-upvoted idea: why not integrate Timeline with Microsoft Launcher on Android?

This was actually an idea we had been playing with for some time. But as with many of our feature ideas, we used Insider feedback to help move the concept up in our development schedule. The Microsoft Launcher team announced support for Timeline on the same day that the Windows 10 October 2018 Update was released.

Along with suggestions for cool, new features, Insiders have also provided us with valuable performance updates along the way. For example, Insiders reported a problem where explorer.exe was crashing while they were using Timeline. After digging further, we discovered that Timeline was crashing explorer.exe if users pressed ALT + F4 while it was visible. We quickly issued a fix with Build 18277. Thanks again to our sharp-eyed Insiders for helping Timeline perform as good as it looks!

As we move into planning for future development, we’re focused on yet another Insider request: add support for more apps in Timeline. Browser support was especially high on our Insiders’ wish lists, which led to our new Chrome extension. Now, Timeline can bring together more of your activities. And with the Search feature in the upper right corner of your Timeline, you’ve got a powerful tool to filter all of these activities for even greater productivity.

Look for more Timeline updates in the future and keep that feedback coming!