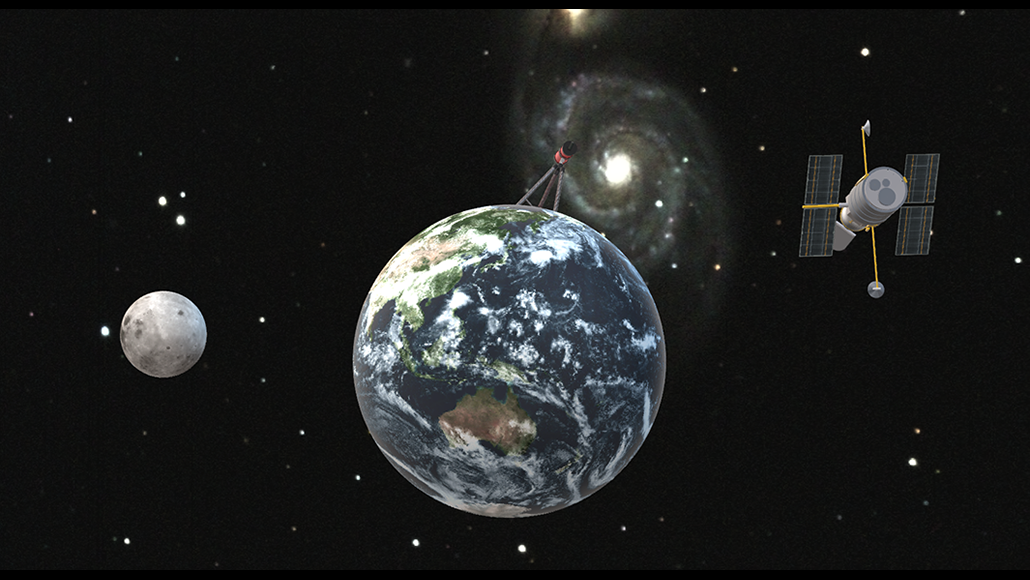 Vincent belongs to the Back Bay Amateur Astronomers Club, a club based in Virginia Beach that holds free public astronomy events often sponsored by the city. Club members set up telescopes and presentations that inspire wonder about the cosmos and explain the physics behind all those twinkly lights in the sky.

Using Paint 3D and a Surface Pro, Vincent creates models of the sun and other celestial bodies and uses them as visual aids during astronomy demonstrations on the boardwalk and community spaces like the local library. With the help of a projector, he presents his models in vivid motion. Paint 3D enables Vincent to rotate the images and interactively demonstrate concepts like the sun casting the moon’s shadow onto Earth during a solar eclipse or the location of an orbiter like the Hubble Telescope in relation to Earth.

“We are visual creatures, you know? It can be hard for people to grasp abstract ideas like the physics of astronomy,” Vincent says. “So being able to model the movement and position of the sun and planets really does help out a lot. And it makes it more fun.”

During Halloween of last year, the astronomy club set up a neighborhood learning installation featuring a real-time projection of the moon via telescope and Paint 3D images illustrating its phases. The club ended up having a 45 minute conversation with an 11-year-old girl about the moon and how telescopes work.

Image: Vincent with his public moon demonstration for the astronomy club

“I think we created an astrophysicist that day,” Vincent laughs. “It’s amazing to unlock that kind of enthusiasm.”

Vincent spent 25 years in the Navy where he was a technical expert and taught combat air control. He’s now a systems engineer at a network security company and has gone back to college to pursue a degree in physics, with the goal of becoming an educator to grow the next generation of innovators and scientists.

Vincent believes strongly that it’s more important than ever for young people to become more than just consumers of technology. To thrive today and in the future, the next generation must be empowered with the skills to create with technology. Because technology is transforming nearly every industry—from augmented reality in the field of medicine to drones assisting with archaeology—having tech skills and knowing how to use them to create solutions to society’s problems will be essential.

“It’s a mindset, and it goes beyond knowing how to code,” Vincent says. “When you design new technology, you have to translate ideas into functions that are actually useful. You also have to make it accessible. Technologists have the power to shape our lives, and that’s a big deal.”

Vincent says that he plans on encouraging his future students to consider not only how they’ll create something, but how they’ll share it with the world. If they invent something new, will it be useful and accessible to others?

For Vincent, Paint 3D is an example of successful innovation, because its simplicity lends itself to usefulness. “I can send this 3D model of the solar eclipse to you, and you can play with it or change it,” he says. “Because it’s so simple, I don’t waste time. I can get right back to creating.”

Image: Vincent (center) at an astronomy club demonstration for the 2017 solar eclipse