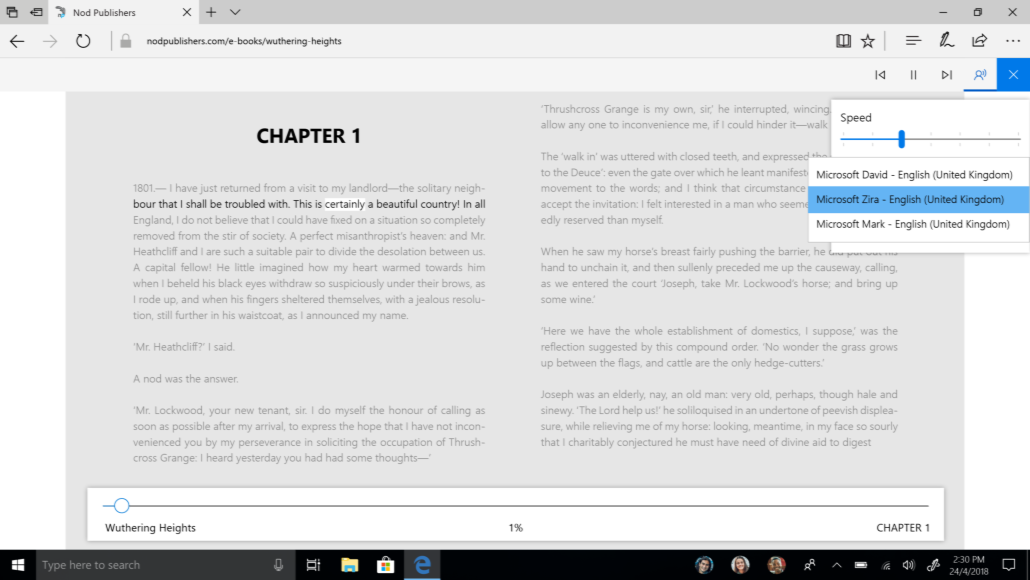 Hello Window Insiders, and greetings from the Microsoft Edge team! With the next release of Windows (RS4) just around the corner, we wanted to say “Thanks!” to our Windows Insiders. Your feedback has helped make this new version of Microsoft Edge our best yet.

In this article, we’d like to explain just how important Insider feedback is to our development process. We’ll also highlight several features and fixes that made it into the Windows 10 Spring Creators Update (RS4) – in large part, because of the comments and suggestions from Insiders like you.

What do we do with Insider feedback?

We look for ‘hot’ issues in the days immediately following each Windows Insider preview build and prioritize getting them fixed in the next build.  We also continuously aggregate suggestions and maintain a list of the top overall asks from the Insider community. This list is a central part of how Edge leadership plans “what’s next” for Microsoft Edge. Everyone on the engineering team knows what’s on the list, and we’re all working to address it in future releases. Here’s an example of what we see internally:

You can dig into an Insider’s version of this list by going to the Feedback Hub app, opening the Microsoft Edge category and sorting by “Upvotes.”

How Insiders inspired the next version of Microsoft Edge

While we try to look at as much Insider feedback as we can, we pay especially close attention to those suggestions that get the most votes by Insiders. Based on your feedback, we’ve made substantial improvements to Microsoft Edge fundamentals such as reliability, performance and site compatibility.

This includes important bug fixes made throughout the development process. Bugs are to be expected with early Insider Preview builds. But thanks to the sharp eyes and speedy feedback of Insiders, we were able to address these issues faster – much to the delight of our engineering team and the entire Insider community.

Insider suggestions also help inspired some of our most exciting new features and improvements in the Windows 10 Spring Creators Update – whether it was ideas to improve an existing feature, a push to prioritize a feature already planned – or a suggestion that sent us off in a whole new direction. Here are just a few highlights:

Evolving full screen mode (F11). Windows fans have been enjoying this feature since the Fall Creators Update. In this next release, Windows Insiders helped make it better. We heard your feedback, and we updated the experience, so you can access the address bar (and navigate to other sites, add a site as a favorite, and more – all without leaving full screen.

Instantly mute auto-playing media on websites. This was one of the most upvoted suggestions by Insiders for Microsoft Edge. Microsoft Edge now displays an audio icon that shows which tab is playing sound. Just click the icon to mute and unmute. Thanks to everyone who shared feedback requesting this handy feature.

Form Fill for credit cards and address fields. Microsoft Edge can now save and automatically fill your credit card and address information on payment and related web forms. Thanks to Insiders for getting this prioritized for the current Windows release!

Use Extensions when InPrivate. This was yet another great Insider suggestion with lots of upvotes. We heard your feedback and have added the ability to load extensions when Microsoft Edge is in an InPrivate window. You can grant individual extensions permission to run in InPrivate from the options menu for the extension.

Bookmark button and flyout become one. Microsoft Edge has simplified adding and managing bookmarks for EPUB and PDF books. Based on your feedback, we now allow you to add bookmarks and manage your list of bookmarks from the same location.

Accessibility improvements. Responding to your feedback, we added additional context for screen reader users with vision impairments when they perform key actions. For example: When a user opens a tab, Narrator announces “Opening new tab”, and when you add a favorite, you’ll hear “Favorite added, find it in Hub, Ctrl + I.” When you click on a link, Narrator announces, “Loading page” and when the page has finished loading, you’ll hear, “Loading complete.”

While we gather feedback from a number of channels such as community and support forums, the Feedback Hub is still the one that gets the greatest amount of attention from our engineering teams.

You can access the Feedback Hub in Settings – but you can also get to it directly from Microsoft Edge in the Feedback & Reporting pane. If you see an issue with a website or encounter a page that seems unsafe, you should continue to use the other options here, but if you have feedback on the Microsoft Edge web browser itself, click the link under “Microsoft Edge problems or suggestions.” Once you’re in the hub, you can search and vote for an existing issue or suggestion – or create your own post.

As we look toward upcoming releases of Microsoft Edge, your feedback will continue to have ever-growing importance in planning and prioritization. In fact, as we’ve said before, our product backlog (a.k.a. “to do” list) is more influenced by user feedback than anything else.

Thanks again for helping us build Microsoft Edge, and keep that feedback coming.