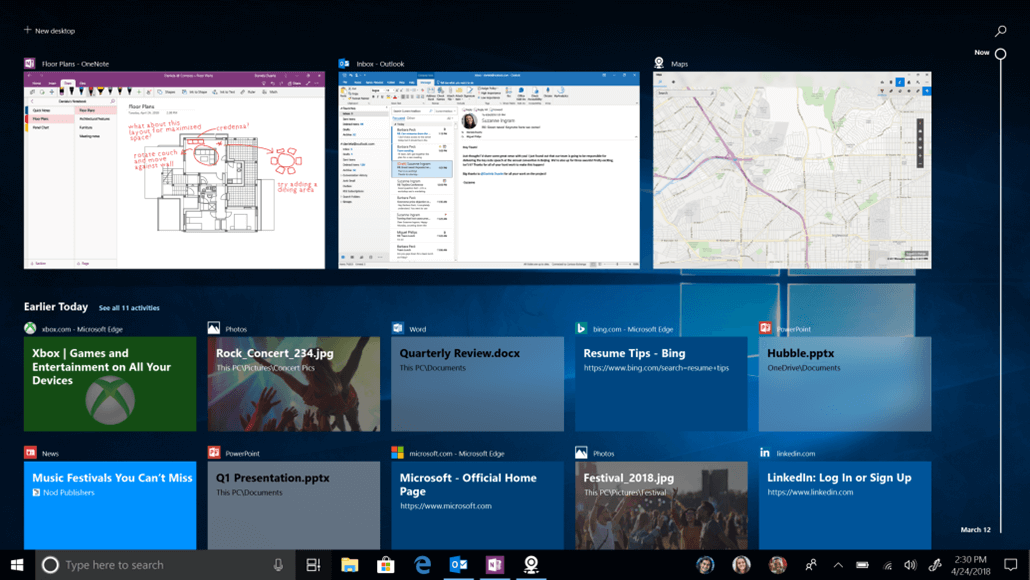 Switching between multiple apps during the day? Wishing you could easily access that cool website you saw earlier last week on your phone, but on your PC? You can breathe a sigh of relief knowing that with Timeline, your everything will be easily accessible in a chronological view just by selecting the Task View button.

So how has Timeline gotten to where it’s at now, and how are Windows Insiders helping us determine what’s next? Let’s take a look!

Finding your stuff made easy

Before the release of the Windows April 2018 Update, Windows Insiders had a chance to check out upcoming features by downloading Windows 10 Insider Preview Builds. We asked Insiders to vote on their top 10 favorite features from that round of development, and Timeline, a new feature to help keep you organized, made the list.

Short of time traveling through a wormhole, Timeline is the next best thing if you want to go back and access activities from the past. Tom Alphin, a Microsoft engineer who has been working on Timeline, recently joined us on our podcast and explained the problem his team was trying to solve.

“We identified some years ago that people were struggling to find their stuff. It used to be that I knew where all my stuff was. It was on my one laptop on the hard drive,” he said. “And now with a world of cloud services, OneDrive and Dropbox or whatever your favorite storage solution is, it’s like, ‘Where’s my stuff?’”

“[We’re] investing in making OneDrive a great place for your stuff,” he said. “We also recognized that people are going to use a mix of things.” Users might have things on a different device and on mobile instead. Timeline helps make all your things more accessible through a single, chronological view of all the documents, websites, and more that you might want to get back to.

You can still find your stuff easily with File Explorer and Search, but Tom’s team saw a clear value in organizing documents and websites chronologically in a predictable and consistent way, rather than by application or some sort of relevance algorithm, like you might see on social media.

Tom thinks that Timeline will increase its productivity-boosting powers as app developers make the most of the new APIs. “As developers embrace the platform that Timeline’s built on, you’ll see more and more high-quality activity cards in Timeline coming from the various apps you love,” Tom said.

What’s in the future for Timeline itself? “It’s the beginning of a whole host of ways to infuse the Windows operating system with exactly what you need next,” Tom said. “I can’t speak to exactly what we’re going to do with that, because we’re still kind of inventing the future, right?  But we know that these activities—that the Microsoft first-party applications and our third-party partners are creating—are at the center of a new type of productivity in Windows.”

Want to try out upcoming Windows features before they’re released? Download the latest Insider Preview build, share your feedback, and help shape the future of Windows.