„This is a once in a lifetime opportunity,“ says Windows Insider, Stefan Malter as he attends the Microsoft global Hackathon—the largest private hackathon on the planet.

A hackathon is a mishmash of two terms: “hacking” (that is, coming up with innovative new ways of doing things) and “marathon.” Typically known as a coding competition for engineers, Microsoft’s Hackathon is a bit different. All employees, not just coders, are invited to four days of collaboration, creativity, and problem solving. Attendees bring an amazing variety of skills and ideas to the event, working together on an equally diverse set of projects.

This year, we took that idea of open and diverse collaboration even further. For the first time ever, we invited Windows Insiders to join us for our Hackathon. Insiders were selected through our Insiders2Campus contest based on their answers to one simple question: Tell us about your passion for solving challenges.

The responses we received were amazing—and inspiring. After some serious deliberation, the Windows Insider Team eventually selected ten winners. Our group came from all corners of the globe, from Argentina to Zimbabwe, with backgrounds in journalism, software development, and design, to name only a few. Congratulations to all our winners! You can see their winning entries here. 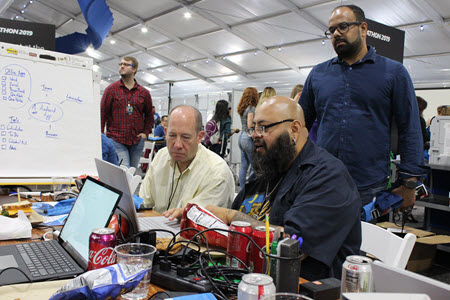 With over 27,000 participants at this year’s Microsoft Hackathon, joining the event for the first time can be a bit overwhelming at first. But it’s also incredibly exciting. “The moment we arrived at the Hackathon tents, I was surprised by such a large gathering,” said Antonio de Marco. “These people were working on truly mind-blowing projects.” In fact, this year, participants worked on over 6,000 such projects, including world-changing ideas for accessibility, environmental issues, healthcare, and productivity. Past winning projects have led to bleeding-edge innovations such as Seeing AI, Health Bots, the Xbox Adaptive Controller, and more.

To get started on their own projects, our Windows Insiders were divided into three groups. One worked on an app to help control illegal timber trading (by using Artificial Intelligence to recognize specific types of wood). Another group set out to design a universal Microsoft phone app. The third group came up with ideas for improving the channels for users to provide feedback on Windows.

Like all participants at the event, our Insiders dove into three days of intense conceptualizing and prototyping, fueled by an endless supply of snacks and beverages–not to mention the energy and enthusiasm of their teammates. The goal was to create a proof of concept to showcase their work to other participants on the final day of the event—something we call the ‘science fair’. 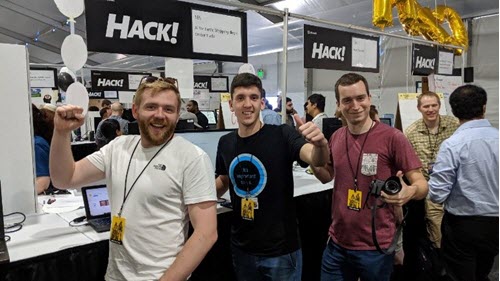 Along with contributing their own, unique talents, Insiders had an opportunity to pick up new skills. „As a designer and illustrator, I only concern myself with the look and feel of the design. The coding? Not so much,” said Dan Flores, an Atlanta based artist. “But this week, I jumped at the chance to demo our mobile app idea and learn Adobe XD. With the help of my team, I figured out how to incorporate my designs into a functioning demo. I’ll follow that same process with my other projects from now on.“

Another Insider, James Mundy, shared a similar story about venturing outside his area of expertise to learn new skills. „For our pitch video, I had to do some presenting to the camera. It’s not something I have much experience with—so it was a good skill to focus on and improve. We also improvised a way to use a Microsoft Surface as a teleprompter—another first for me!“

Our Insiders were equally excited about working alongside world-class researchers, highly skilled software engineers and other Microsoft employees who participated in this year’s event.  As Stefan described it, „Imagine strangers coming from all over the world. They don’t know each other, but they work together for four days and have a lot of fun. In a world with many cultural differences and lots of current challenges, this experience is my highlight!“

Insiders also had time for some great, extra-curricular activities. Highlights included a campus tour, with a visit to a cool, new office workspace we call the Treehouse (which is literally built in the trees). The group also enjoyed a Microsoft HoloLens demo at the visitors’ center, got the chance to meet with Microsoft executives, and even attend an internal Microsoft meeting.

In the end, though, our Insiders agreed that it was all about the people they met and ideas they shared. As Clint-Roy Muvirimi-Mukarakate said, “I was impressed at how open the Microsoft team was to our thoughts, inputs and suggestions. It felt like a meetup between equals. We were essentially a big group of superfans.” It’s that kind of collaborate spirit that makes the Microsoft Hackathon such a success, year after year. And judging from the work of our Windows Insiders, it sounds like they fit right in!

The Windows Insider Team would like to thank all our participating Insiders who participated in this year’s Microsoft Hackathon.  And for all you other Insiders—keep an eye out for an opportunity to participate in next year’s Hackathon event. We look forward to seeing you there!